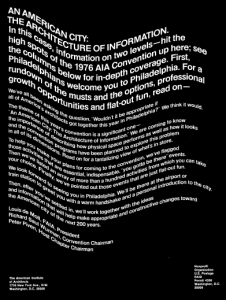 Re-introducing: The Architecture of Information
An idea that failed to become a Big Deal in the AIA in 1976, its roots in the workshop of Louis Kahn, and why it matters now more than ever.

Video I captured from the podium (audio is a little iffy)

In 1977, Richard Saul Wurman shuttered his failing architecture practice and moved to Los Angeles. By the mid 80s, he’d invented the TED conference series, redesigned the PacBell Yellow Pages and was publisher of a revolutionary series of travel guidebooks. These innovation were based quite specifically on the concepts he learned from Lou Kahn in the 1960s and which he introduced as “information architecture” as chairman of the AIA national meeting in 1976.

In 60 richly-illustrated minutes, Wurman scholar and practicing information architect Dan Klyn shares the story of the 1976 AIA national meeting, the invention of information architecture, and the ways that the work of Wurman and fellow Kahnian Robert Venturi continue to demonstrate the extraordinary power of architecture to create and shape the meaning of place and space.