Architecture and design are not the same thing. It’s been my cause célèbre of late, perhaps to a fault. This differentiation and its impact on how we might go about doing information architecture work is part of a talk I’ve been giving called “Establishing What ‘Good’ Means.” It’s also been featured in a blog posting for TUG, the information architecture consulting practice I co-founded last year. The lot of it is inspired by a brilliant lecture by Peter Eisenman entitled Architecture or Design: Wither the Discipline. A preposterously curt paraphrase of that lecture is as follows:

Architecture is not design: it’s a different discourse. Architecture is an analytical process of identifying exceptions. Design is a synthetic process for solving problems.

Maybe it’s just me, but I think that the dias at the front of a lecture hall lends itself especially well to the rhetorical device of the sweeping generalization. Particularly when the words used in generalizing aren’t projected on screen behind the lecturer as the rhetorical blanket is being spread across the room. Mr. Eisenman is seated during this lecture and appears to be reading from written notes – no slides – so instead of watching the video I just listened to the words and let my imagination develop whatever images it liked. The picture that developed in my mind’s eye as Eisenman delineated between architecture and design was that of a great expanse of cloth. And as I considered the image of the expanse of cloth, its aptness as a metaphor for differentiating between architecture and design convicted me.

Think of a big project you worked on last week. That project in its entirety is the great expanse of cloth. Architecture is where the cuts go; defining what the parts of the project are and how they’ll inter-relate. Architects operate the scissors. Designers work with the resulting parts and shape each part to be the best part it can be, solving the problems defined in the act of saying and then indicating in an incisive way “this part is not that part.” 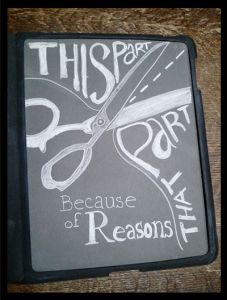 Architecture happens, to misuse Mies, because of reasons. In his words it begins “with the careful placement of two bricks,” and continues, in my reading of Eisenman, through an analytical process whereby the available permutations with those two bricks are explored before an ideal system for placement is developed.

Design begins, for Eisenman at least, after the matter of the placement(s) of the bricks has been settled. After, in the terms of the metaphor of the cloth, the cuts have been made.

Oftentimes, the synthetic process of making a part be the best part it can be will reveal an exception that the architect missed. The problem one was given to solve with design turns out to be impervious to the workings of the designer because the architecture is wrong. Back to the metaphor of the fabric, it is to be expected and appreciated that designers will sometimes find their piece of the overall fabric of the project needs to be sewn back into its formerly-adjoining pieces and then re-cut. In this way, the relationship between design and architecture is less a binary zero-sum game than it is a mobius strip: 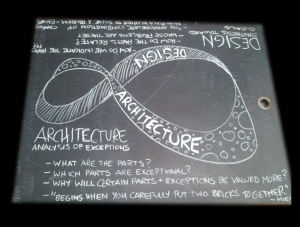 Your project is a piece of cloth. Architecture is where the cuts go; architects hold the scissors.

Design is making the resulting parts be the best parts they can be, solving the problems defined in the act of cutting.